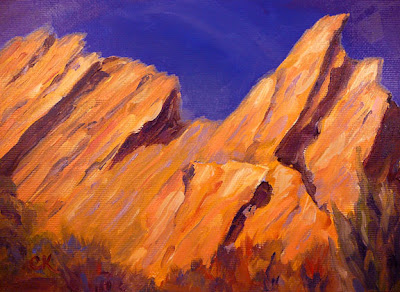 As I understand the daily painting movement, its purpose was to keep painters practiced and loose by doing something small every day, as opposed to the ongoing work required for a larger piece. It's possible that the idea was that the painters would still compose their larger works, while the smaller ones helped them build skills and keep momentum going. Interestingly, the small paintings have taken on a life of their own, online. Well, at least with me. I love their intimacy and how they fit into a normal house. You can put them up anywhere to grace a nook or a cranny (or a crook or a nanny). They don't all have to be above the fireplace or couch.

That said, I did a 4x5" sketch during my Tom Brown workshop a couple of weeks ago, and liked my initial painting enough that I wanted to do it bigger. Funny that 6x8 is bigger, but it's twice the size of the original. We had gone to Vasquez Rocks, which is amazing, and is also where lots of movies were filmed (do a web search). It's so photogenic, and I got that thrill of playing with colors. 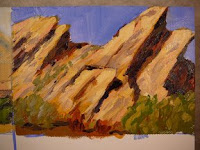 This was the 4x5" sketch of the rock. It's more raw, and I often like that. It's paler, too, although that might not be visible in the web photo and it might depend on your monitor, yadda yadda. 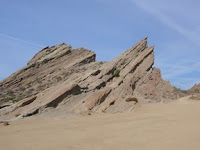 This is my photo of the rock itself (slightly different angle). It's a pretty amazing piece of geology. In this photo it looks awfully gray. I recall it being much richer, but, again, that might be the photo.

So maybe I'll do the rocks again, even bigger, on a normal canvas. Could be fun.
Posted by Connie Kleinjans

Email ThisBlogThis!Share to TwitterShare to FacebookShare to Pinterest
Labels: small