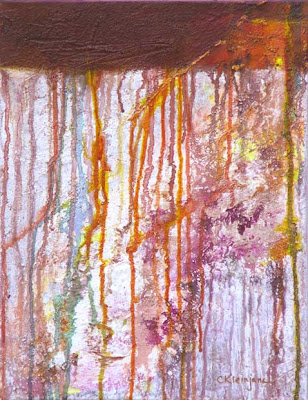 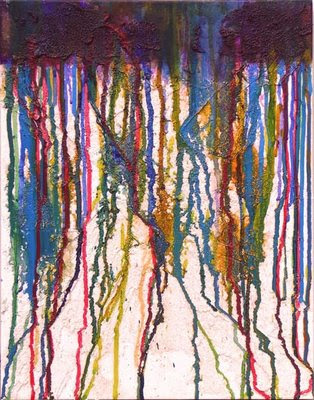 I have the next one queued up, but I'm thinking I should wait until I've finished a few semifinished ones first. And make sure I'm prepared for my workshop. It should be scads of fun! There are still openings, if you're interested. Hmm?
Posted by Connie Kleinjans No comments:

There's been quite a bit of interest in the techniques I'm using for creating my abstracts, so I'm teaching a workshop. I'm kind of new to teaching, so I could use any help you can offer for getting the word out. Here's my blurb (do you like the title?):

Painting Fabulous Textured Abstracts
(or why the hardware store is your best friend)
Do you love richness and texture in your paintings? Do you want to experiment with multimedia in a way you've never done before? This fun, lively workshop teaches you to use materials from both the art store and the hardware store to create amazing abstracts. No prior experience needed! Just bring your adventurous spirit! Expect to go home with a minimum of two (and maybe more) abstract paintings. 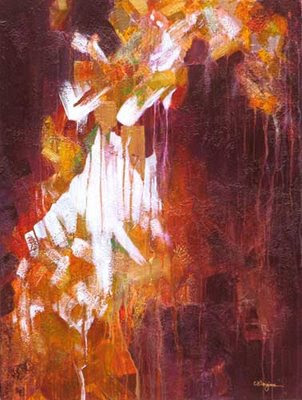 12/2012 update: I first took this to a textured abstract class and mucked with it, then painted over it. It now looks like this.
It's been a busy time, getting myself settled in at Gallery 2611. I have some studio space there, yay!, but I needed to set that up. That meant a trip to Ikea, and two -- two! -- repeat trips to get missing parts. I also treated myself to a gorgeous new easel, and bought more paints, brushes, and texturing supplies. So I haven't made much time to paint.

However, I did this piece last month or so. I almost named it The Fighter, but the current title feels right (and almost sounds the same). But the reason I almost named it The Fighter is because it was one of those paintings that just had a mind of its own, and wasn't going to cooperate with any plans or concepts I had. I cajoled it, changed compositions, let it sit, revisited it, and, finally, here it is. I think maybe the struggle shows a bit, and I like that.

For those of you interested in art process, here's how I got to the final image:

Step 1: I wanted to play with my drippies (I really need a better name for those...), but on the diagonal instead of up and down. I played with a few compositions in Photoshop, along with a few palettes, and came up with this as my concept: 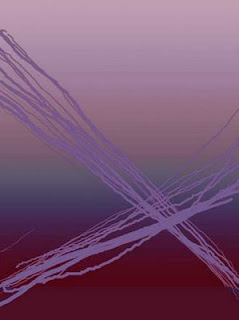 Background goes from dark to light, and the stripes are in a middle value, so they kind of merge with the background in the middle. I also looked at it the other way around: 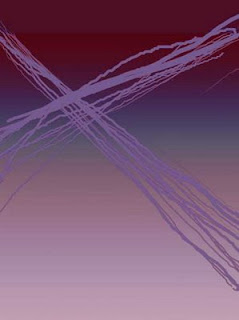 That's a funny thing about abstracts: They are not glued to an orientation. I mean, seriously. Those of you who do landscapes or figure painting, do you ever rotate your work to see if it would look better oriented that way? Isn't that a bizarre concept? Well, kind of. Ultimately a work flies or falls based on the composition and we do often look at art from a different perspective to see what we can learn.

Step 2: I had a couple of nails on the wall, and I hung the painting so the drippies would go at an angle. I put another canvas underneath just to see what would happen with the drops that fell off this one. Here's the first version. 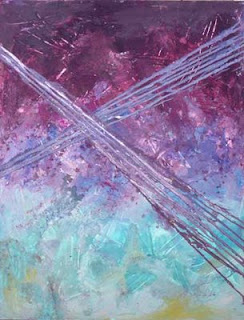 Frankly, meh! Not so good. The Photoshop version made promises I was unable to keep. (And if I'm wrong and you like it, tell me!) I think I thrashed for awhile at this point, and eventually decided I had to have a new concept.

Step 3: Now, one of my theories in making textured art is that no underpainting is wasted; it is merely source material and adds richness to whatever you put on it. Personally, I like success by definition. So, after "meh," a small explosion occurred and this emerged: 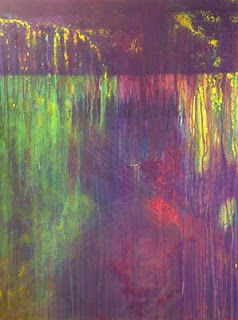 Kind of ghostly, kind of interesting, but, aughh! it still wasn't there. (Again, feel free to totally disagree with me. I'd like to think everything I touch is brilliant.) (Yeah, right. Maybe if I was Picasso.) You can see where the drip lines cross near the middle, though.

Step 4? Sadly, I didn't document the transition from the penultimate to the ultimate painting. But, like an earlier painting, I'm surprised at the iterations and how different they were. (And now, glad to have this record of it.)

End note: And interesting resource. I found a wonderful blog whose author talks straight to artists. It's Edward Winkleman's blog. He works out of Chelsea, New York, and gives wonderful, honest information, much of it useful to emerging artists. Here's a link to his excellent page on finding a gallery.
Posted by Connie Kleinjans 8 comments: 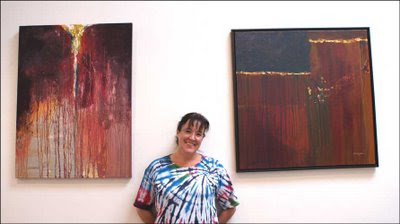 (Me, in scruffy clothes, posing between Scissure, on my right, and Red, on my left.)

Well, I'm in a gallery. And, yes, I'm pretty excited about it. It's Gallery 2611, in Redwood City, CA, and I'm sort of a partner. So I have some additional studio space, and I've found a group of fun artists to hang out with. Hey, they're a kick in the shorts! If "Ain't Too Proud to Beg" comes on the iPod, dancing just might ensue.

Now, I live high on a hill with a taciturn man, and I've got my Jack Russell Terrorist for company. But I've been missing the people contact I used to get at work. I've also come to realize that I want to interact with other artists. Gallery 2611 seems to fit the bill. Also, two of the artists are experienced teachers, and they think people might be interested in my texture techniques, so they're encouraging me to teach a workshop. I'm aiming at mid-May.

Thanks, Joyce, Guy, Gary, Jackye, and Dianne, for letting me join you. Here are Joyce and Guy's websites: