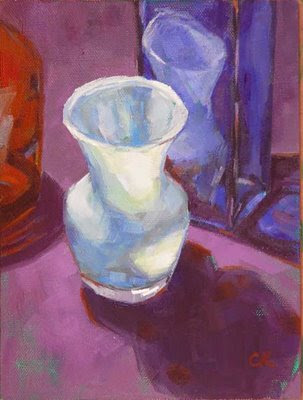 I did this one a few months ago, in August, after I painted my little white glowing vase (this one is aqua). While the flowers add a certain drama to the other one, I really like this one for its palette (especially the orange-brown against the purple), the reflection in the blue bottle (actually, another interesting color), and especially the way the beam of light coming in the top puts a spot on the side. And, like in the other painting, it had those bright spots in the foot of the vase.
Posted by Connie Kleinjans No comments: 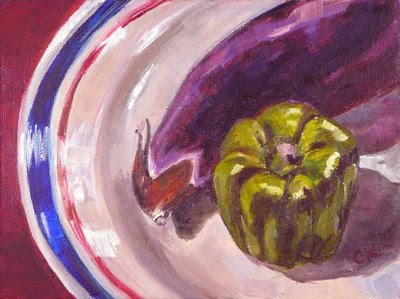 This was another one I did during our summer vacation. It was a challenge for a few reasons: vegetables with lobes (peppers, pumpkins) make you pay special attention to perspective (they're sort of like a series of rounder veggies), and reflections on a white dishes make you use your whitest color for the highlight, meaning you have to darken the white of the dish. Here I took them warm; cool might have been better. I assembled these because I love putting purple and green together.
Posted by Connie Kleinjans No comments: 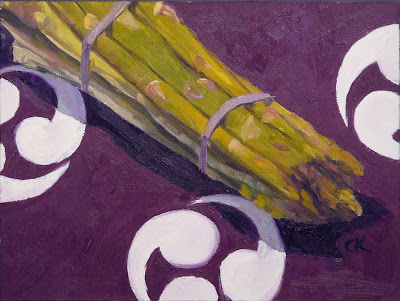 During our summer trip to Japan, I was so entranced with the blue and white dish towel I painted (it appeared in two prior posts: August 30 and September 5) that I wanted to look for more. While we were at Narita airport for our flight back, I found some Japanese fabric that I liked, and brought some home. This purple piece has a design on it called a hidari mitsu domoe (hidari=left, mitsu=three, and tomoe=the tadpole design). I was a little hesitant about painting this, since one sometimes sees foreigners using designs from another culture inappropriately. I mean, a lot of Americans might be upset if someone did a painting of the Statue of Liberty with a baseball cap on her head (although it's a pretty edgy idea). But my research showed that this design represents a lot of things, one of which is water, which seemed right for vegetables. And it looked great with the green asparagus.

You probably know that the Japanese are brilliant at fabric designs. Like, my prior post featured a furoshiki. So I went looking for more Japanese dish towels. It turns out that they're called tenugui (I lived there for 13 years and never knew this) and they can be used for anything. In fact, they're often sold as sweat cloths or head bands for martial arts. I found some online and ordered nine. Expect a few to show up in paintings in the next weeks.
Posted by Connie Kleinjans 2 comments: 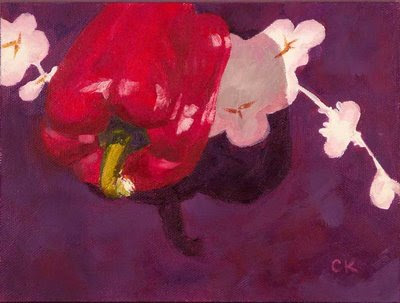 It's been way too long since I've updated. Busy days. Coming out of our summer trip to Japan (I grew up there), I did a few more small paintings with a Japanese flavor, and I'll be posting those in the next few days. I kind of like the composition on this one, up towards the top of the picture area. The red pepper -- they're so gorgeous! -- is sitting on a purple furoshiki (in case the colors don't show right on other monitors).

What, you ask, is a furoshiki? It's a colorful piece of cloth that you can use to carry things in. They come in a wide range of sizes. The basic theory is that you put the thing you want to carry in the middle, then pull up the corners and tie them. But you can tie a furoshiki in an amazing number of ways depending on what you want to do with it. Now that's recycling!
Posted by Connie Kleinjans 1 comment: