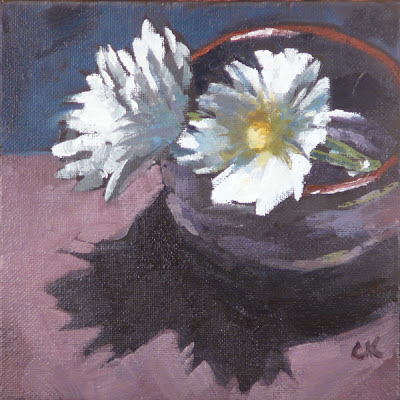 
This felt like a step back after the last one. Hmm. What can I learn? Perhaps the white flowers give me problems? Maybe that I'm being too detailed in the petals? Hmm.
Posted by Connie Kleinjans No comments: 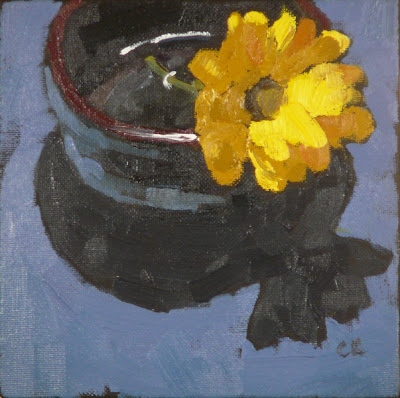 
OK, two in a row that I really like. The flower is surprisingly simple. It has a tan color for the shadowed areas, and a brighter yellow for the areas in the light, and I simplified the shape a lot. I added a bit of red to a couple of the petals.


I'm really getting to where I love how the water creates little bits of light where it meets the container.
Posted by Connie Kleinjans No comments: 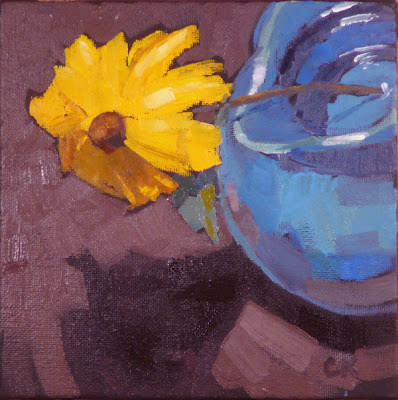 
OK, something worked right here. I could argue with the drawing on the flower, but I don't want to touch it. I love how the water looks in the pitcher, and the brush strokes on the outside of the pitcher. I do see a lot of improvement from the posts a couple of weeks ago, which is encouraging. Can I keep this up?

Strangely, if I compare this with others, I still broke the rule about not making two things the same: The background color has about the same area as the pitcher. Hmm. I'll have to think about that.
Posted by Connie Kleinjans No comments: 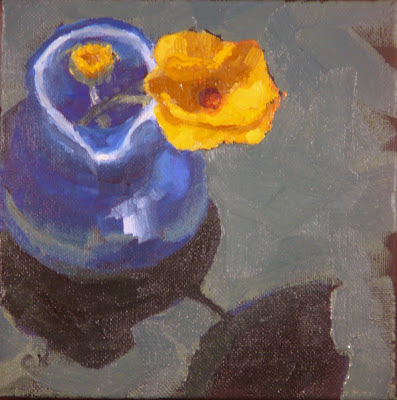 
I was charmed by the little bud hiding inside the vase, hence the title. OK, how's the painting? The focal point has some pop. The painting is pretty loose. I'm doing a few in a row that are OK. Modified yay. But this one still doesn't sing. Why? Ah! I remember something in Alla Prima by Richard Schmid... Here it is, page 14 (which is a really good page), in a section called "When Things Go Wrong." It contains good stuff, some of which is this:


The next question is what exactly am I doing wrong? For the answer to that, the process of elimination must continue. I already know that there are only TWO possible errors in working from life. (Remember that.) To put it neatly, they are:

1. Painting something that is not there in a subject.

2. Not painting something essential that is there.

I also know that those two errors can only occur within one or more of the four visible elements: Color, Values, Drawing, or Edges (or some combination of those).

Color, values, drawing, or edges. I guess they make up the composition. I'm not going to change the drawing, and I don't think it's edges. But, in recent posts I've written about at things that are the same, since similarity creates boredom. If you think of  paintings as having three values, maybe I have the same amount of medium as I have dark. If I play with it in Photoshop, what happens? [Runs off to do so.] 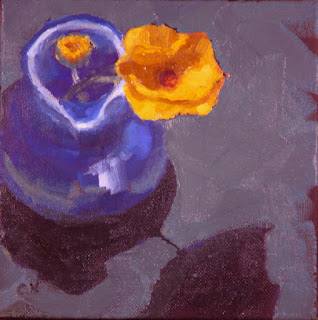 I think this is better. Still not completely happy with the flower, but the background is now darker and cooler. It no longer tries to pull focus from the flower, which pops more. And there's more mystery in the edges on the vase. I might have to do this to the original painting.

Posted by Connie Kleinjans No comments: 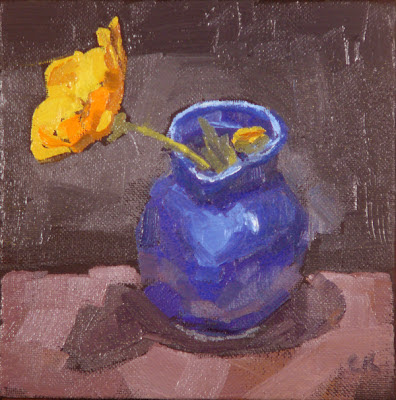 
Continuing with using the neutral colors. Yes, with earthier tones the paintings seem richer than with with the primaries and secondaries. It's funny what can be a neutral. I just has to be less electric than what the focal colors. So a mild blue or purple or orange could be neutral. But in this painting the blue jumps out. And, dang it I still seem to have the friend egg effect: The vase is real close to the middle. As I recall, I also wrestled with getting the angles on the lip correct. They really are accurate. Maybe it's the foot of the vase.


And it's looking like the rule that says "Make no two things the same" really is extremely important. Amazing how much you can learn when that's your main goal. Too bad I keep making the same mistakes.
Posted by Connie Kleinjans No comments: 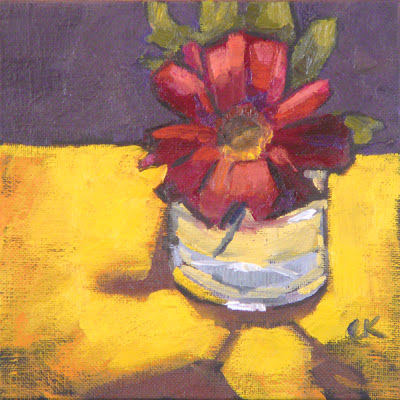 UPDATE: I reworked this as part of my goal to learn about using neutrals. I appears later in this blog.

This one was hard because the values in the flower are dark, and it's sitting on a dark background. It's possible that the yellow is the focal point; at least, it pulls your eye. But the composition works, the horizon like is off-center, and the glass has good reflections. But I think my favorite part is the shadow across the center of the flower. Really makes it look dimensional. Still learning.

I think the big issue is courage...
Posted by Connie Kleinjans No comments:

"Where Are the Bees?" 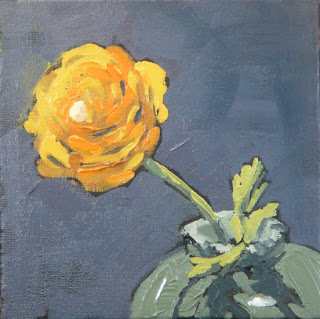 At about this point I wanted to start using more neutrals. Now, in a small painting you can use a lot of color, since it won't feel as overwhelming. But I felt like I was using too many primaries and secondaries and wanted to learn more about neutrals.

So, given that the current exploration is for education, what can I learn from this? It's rather sweet. The execution is OK. The composition could have been better. Hmm. Partly, I think too many things are similar: The space above and to the left of the flower are about the same, and the square footage of the flower is about the same as that of the vase. And you could almost fold the painting in half on the diagonal, and the two halves would match. I don't know that that's bad, mind you, but worth noting. And given how much background there is, it could have used a bit more variety. And if I wanted more drama, I would have had a broader spectrum of values. But it is kind of true to the nature of the flower, which has tidy, contracted petals. Stay tuned.
Posted by Connie Kleinjans No comments: