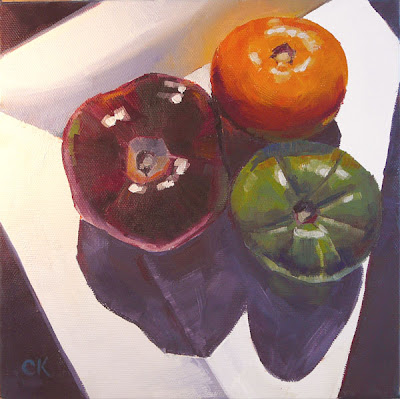 This was fun. It felt like some of the skills I've been working on finally applied themselves. Specifically, I've been trying to paint with more mixing the color on the canvas and less blending; to get that dark belt you see on spheres like tomatoes; to get reflections that looked organic; to go darker; and not to futz as much. All of these came out better than in the past. In places, it painted itself. I liked Tom Brown's comment about that: Sometimes you're just holding onto the paintbrush and it's going by itself.

I painted this from a photo I took at my father-in-law's house. These three gorgeous tomatoes were going to be part of dinner, and they contrasted beautifully with each other and with the square plate. I set them up in the afternoon sunlight, with the shadow from the curtain across the right side of the plate.

One thing new that I tried was to do the highlights in two steps. So today's lesson is this: When doing highlights, try first putting down a shape of white mixed with the surface color. Then place your purer white on top of that. It seems to make it sit on the surface better. Some people suggest that you lean the white toward the opposite temperature of the surface, but just a bit. I'd like to hear opinions on that.
Posted by Connie Kleinjans