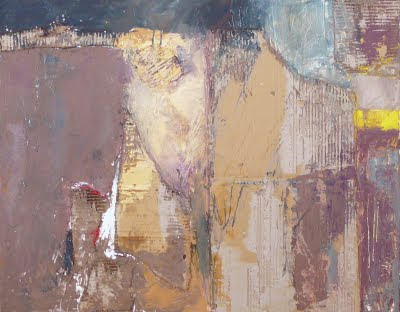 One of the classes I'm taking is about textured abstracts. I love the class, and am having a great time. This week the teacher suggested that, before I start the painting, I make a textured foundation using cardboard. I was hesitant, since I'm painting in oils (well, with marble powder), and I've heard that you shouldn't mix them. But I figured I could learn something.

What came out? This! And I really like it!

Later, at home, I researched the combo. I found web sites that said you should always gesso paper first, but they didn't give resources. I found a few artists who do use paper in their base layer under oil. And finally I checked my Artists' Handbook by Ralph Mayer. Ralph says that no oil paintings on unprimed paper have survived the centuries. Since Ralph's book is a standard, I'll buy the data. So, no, it's not a good process for the long haul.

Here's my quandary. Now what do I do? Ralph says it has thirty or thirty-five years. I'll probably never be all that famous so it probably won't get saved by a conservator. But I gotta do one of the following: sell it as is, keep it as is, or remove the cardboard. I can't sell it in good conscience, and I'm not convinced I want it around forever, so...

Sigh. Do we owe our buyers a work that will last thirty years or a hundred years?

Anyway, if I'm going to peel off the cardboard, I should do it while the paint is still workable. I'm thinking I'll replace it with burlap (not identical, but also textured and earthy) and then play with that. If I'm lucky, the added experimenting will add richness.

What to do about the class? I should either take texture material that works with oil, or switch back to acrylics. Hey, I've been using marble powder, and I'm told it works with acrylics, so maybe they'll be workable more like oil. We'll see.
Posted by Connie Kleinjans