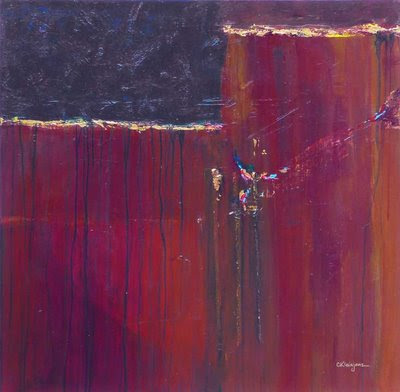 I'm not sure why I'm calling this one Red. I mean, it's mostly red, but not entirely. There was a point during its evolution where I wanted to call it I Tried to Paint a Red Picture and Look What Happened. But it seemed to want to be named Red.

OK, as I move forward, I'm getting the sense that I'm starting to play it safe now. This might be kind of a safe painting. But at the same time, I love the richness. The colors have a lot of depth coming out of layers and layer of translucent paint. While I was painting it, I found myself feeling this kind of ache for the richness of it, if that makes sense. Then again, I wander craft fairs and look at colors and feel textures (I love booths where they make carved wood items, and sand them until they're like silk).

OK, this went through a bunch of iterations. I worked on the first during the workshop at the end of January. It was pretty much a lot of interesting texture I made by spritzing rubbing alcohol and splashing colors around. It was cool looking, kind of, but mostly texture: 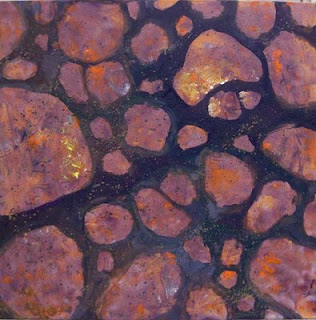 It's OK. It's wallpaper. So I decided to use it as a take-off point at home, choosing a palette and finding shapes to simplify. Eventually it turned from a bunch of amoebas into a bunch of squares (the circular line was my prep for the following step): 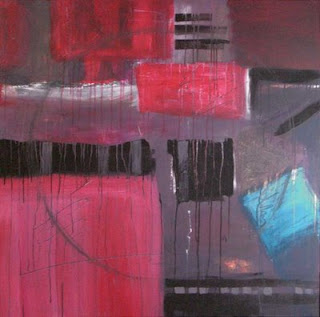 I wasn't happy with it. Too square, too clunky or something. The blue square that's kind of akimbo wasn't helping. If you could cut off the rightmost 8 inches it looked OK. So, pfeh. I tried adding a circle and reversing the colors on either side of the line. It came out kind of like this (I know I don't have the color balance right): 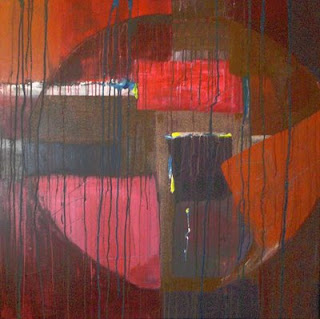 Totally still not there. I returned to my theory: simplify, simplify, simplify. So I started to add transparent red to it. I love alizarin crimson. I also started to play with the drips, and kept adding and adding them until I built up the texture. But you could still see some of the underlying layers, which was part of the depth. I added the square elements at the top of ground it (otherwise it's wallpaper). And I added the focal point just right of center. Et voila.

However, there is zero of the original painting. I wonder if I need to work on my process.
Posted by Connie Kleinjans