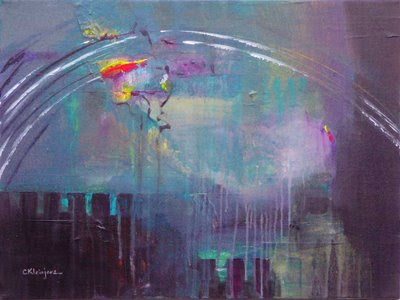 So, what do you feel while you're painting? When I first started painting again after many years, I was euphoric. Of course, eventually I got used to it and it faded. But doing abstracts feels right. (For now.) There are times when I get into kind of a hyper place, and paint with an intensity that, to my vague embarrassment, others in workshops have commented on. It's not always like that, but I'm again having those little electric charges of excitement, when I see something that looks right. "Oo! That's cool!"

Do you play music while you're painting? I've always found chamber music to be good. I like mostly non-verbal, or at least non-English music, since words often interfere with my focus. The right New Age music is good. At the recent workshop I learned about Paul Schwartz and am rapidly collecting his albums. I especially love Ombra Mai Fu on the Aria 3 album. Here it is on YouTube. While looking into that I found Libera, an English (I think) boy choir. This piece -- Far Away (also on YouTube) -- is stunning. I seem to be into sacred texts at the moment. Except that I've played low-key Hawaiian slack key the last couple of mornings (John Keawe). Hmm. And the other day I put on my favorite R&B collection. The intro to "Soul Man" is the most bodacious intro of any song, ever.

OK, now, about this painting, as usual the final artwork has nothing to do with the original composition. I had a meandering rock wall, and put down some painters tape before painting, just to get some variety in edges. Then I simplified. It feels like a waste of effort, but it's nice to have some of the richness under the surface. I named it Battlements for the tooth shapes at the bottom that look like castle battlements. The arc pulled this together, though, and the colorful bits look kind of like fireworks. I can imagine a story there.

Of course, someone else's story would be something else. Abstracts look different to everyone.
Posted by Connie Kleinjans