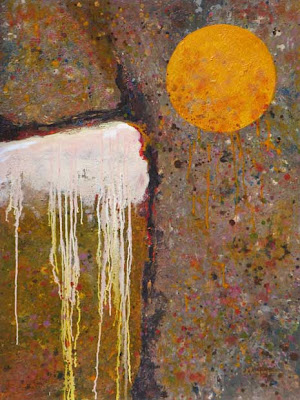 The composition for this came to me while I was hiking, when I saw some cracked rocks. Of course, although I started with that notion, the painting developed a mind of its own. (Maybe they all do.) And as it developed, it contradicted a guideline I have that I've mentioned before: Mostly I find paintings are better if they're simpler. But when I had finished the textured underpainting, it was too simple. It needed something else. So I just added some shapes. I was a little concerned about them, since they're so, well, stark. But it felt right. One of my favorite parts is on the leftmost "rock," where I glazed in some yellow, then dripped the white paint through it whilst it was still wet. It picked up some of the yellow, and it's a cool effect.

So, I had an interesting discussion with a friend today (on IM). Two interesting points he made about abstracts were these:
Then he thanked all available dieties for the name Untitled. There was more, but I especially enjoyed those points. And the one where he encouraged me to trust my instincts.

Speaking of instincts, I used to be told that I thought too much. Could be. I have an obsessive streak. But I think that what came across as thinking was actually me trying to feel my way to an answer, and talking about it -- articulating my feelings -- helped. But the articulating seemed too cerebral, hence the "you think too much."

So, what, you might ask, does "Rondus" mean? I believe I found it in the derivation of a word meaning "round." And it felt right. I mean (and I kind of hate to admit this), my initial thought was that I should entitle this painting "The Jellyfish and the Moon." It's almost charming, but "Rondus" is better.
Posted by Connie Kleinjans