Maybe it's because it's winter. I don't know. But I had such fun doing that last piece (with the sunglasses) that I thought I'd like to do another still life with a surprise. This time it was a rubber ducky. Here's how the it came out on 8x10" gallery-wrapped canvas. 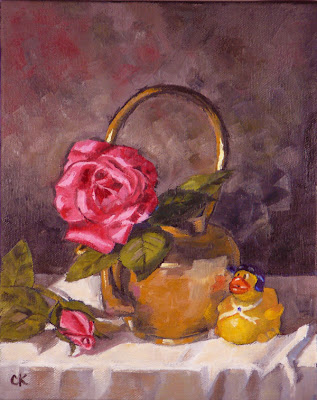 Whereas the prior one kind of flowed, this one fought. I swear, I don't recognize when something is going to be complicated, and apparently it didn't occur to me that it would be easier to do a vase than a pot with a spout and handle. And the rose had an extra large petal at the bottom. Nevertheless, it's pretty cute. It could loosen up, but there is goodness in it, and I especially like the metallic look of the pot.

Here's the small study I did first, on 4x5" canvas wrapped board. 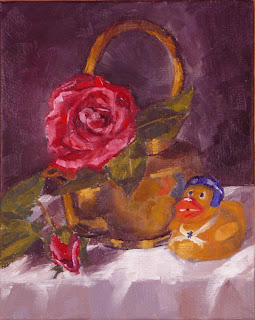 It was pretty hard to get the smaller details in, even with a small brush. But, again, the metal looks pretty good. On a smaller canvas I seem to end up painting bigger. But This one also needed a little more elbow room, which is why the final one had more background above the pot handle.
Posted by Connie Kleinjans