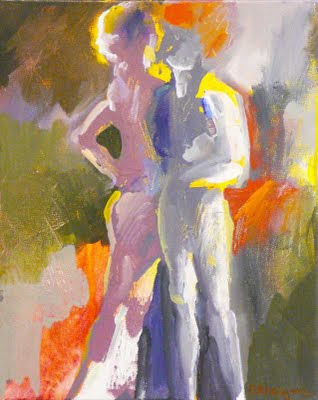 On the third and final day of the workshop, we had two tables set up in the middle of the room, and both models were on them. It's a different proposition to paint two figures. They relate to each other, and it adds a level of complexity.

However, the big thing for me was deciding to eschew realistic colors altogether. As you might predict, it made me focus much more on values. If the colors aren't right, the values have to be. Or much more so. Not sure I nailed it but I still rather like this. I also tried to pick up another effect, which was light coming around the edge. If the model is lit from the side away from you, you might see a bit of light around his or her edges. It's an interesting effect.
Posted by Connie Kleinjans