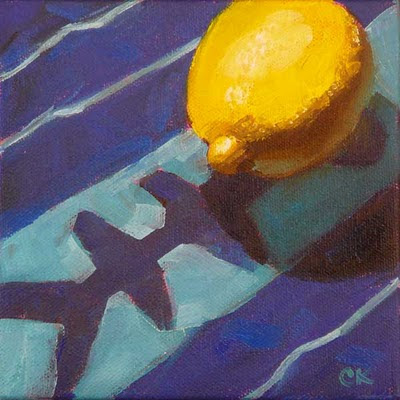 Another of the five-paintings-in-five-days-almost series. I guess if I used a similar subject a few days in a row, it might go faster. Now, a few weeks ago I did some mandarin oranges in a bowl. I wasn't aiming for realism with that one. With this one I was, at least somewhat more (I rarely do photorealism). So, you know how, for most paintings, there's something about them that's memorable to you? In this case it was the lemon texture. I hadn't used that tapping technique to get the bumpiness, and I like it.

I also enjoyed doing the shadow. There's something fun about painting a color and its shadow next to each other over pattern, like this fabric. Having done it, I'm impressed when artists can carry it off. Both colors have to darken the same way (warm or cool, usually), and the patterns need to line up so they flow. It's easy to get jumpy.

With this painting I tried doing the tonal underpainting, which is the picture below. I think that work if 1.) you let it dry first, so it doesn't infect the color you put over it, or 2.) you don't paint with a lot of strokes. I tend to futz too much (a constant battle), and that stirred up the color below. I had to go pretty impasto to keep the colors clear. I would rather have gone with fewer strokes, but that's an ongoing challenge for me. But maybe it was useful to really have to see the value shapes. Hmm. Maybe I should do that more. 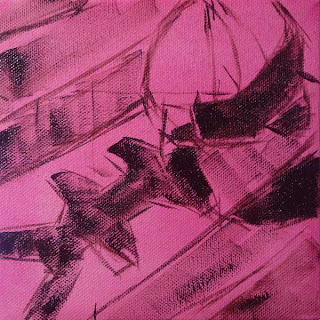 Oh yes. The fun thing about stripes is that you have to get the linear perspective right, even on a small painting, close up. Lots of holding the brush handle and matching angles.
Posted by Connie Kleinjans