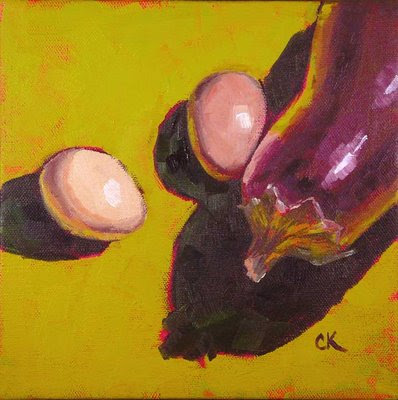 Oh, you know. You see two items together and something makes you think you can connect them in some way. In this case it's egg and eggplant. It's lame, but they both have egg in their name. According to one online source, the eggplant got its name from the smaller whiter varieties that did, in fact, look like eggs.

But! Be that as it may, I like how this came out! Maybe it's the hot red background breaking through the green, or maybe it's the dimensionality of the eggs and eggplant. And, I swear, the eggplant's shadow did look like that! (Usually things don't throw shadows on both sides of themselves, but this did, probably because the light was close.) Also, this has a bit of a cartoon look, but this can be a complement. Whatever it is, I wish I could replicate it at will.