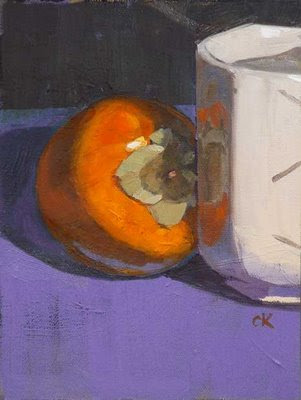 I so admire the blogging painters who can finish something every day and post it. Or even four or five days a week. I seem to go in fits and starts. I'll be on a roll for a few days and won't bother posting, or I'll do something I'm not that crazy about and won't feel like it, at least until I have more things I like. Recently I've found that the daily expectation has become a burden, which makes painting less fun. That's definitely not what I want.

Meanwhile, I felt I was getting too tight, so I painted this over something else so I wouldn't care so much about it. It's better. What I was going for was the sense of the persimmon being half in the shadow, and I also wanted to get the reflection in the tea cup. That's the object on the right (I'm not sure it reads well), and the hash marks are design elements on it.
Posted by Connie Kleinjans