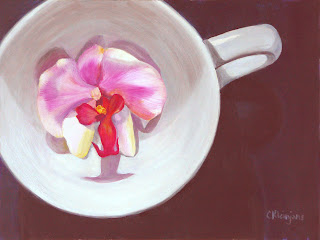 I admire the exquisite work of painters such as M Collier and Jelaine Faunce (see my links). This was an attempt at something like that, although I'm not as good as they are. Maybe some day. I actually finished this some weeks ago, but couldn't get a good picture of it, then we went to Ashland, OR, to watch Shakespeare (which you should do, too). But this morning the windows in the living room were misted up and I got the kind of diffused light I wanted. I should build a light box.

Anyway, this one took me about a week to do (hey, I did do some daily painting; just not a daily painting). There was an interesting point where I used Photoshop to resolve an issue, to wit: In the setup, the orchid reflected pink into the cup. It was quite beautiful, and I tried to capture it. Here's how it looked: 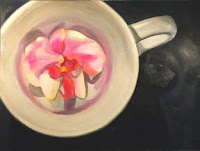 But it wasn't working for me, for various reasons. So I took a picture and opened it in Photoshop. I selected (or outlined?) the pink and poured in the off-white of the cup. Here's what it looked like. You can click the picture if you want to see it bigger. It's rough, but it was a test. 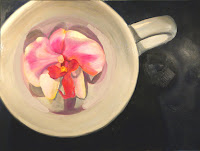 I liked it, so I removed the pink reflections from the actual painting. Later I also punched up the shadows in the upper half of the cup. Doing those two things made it so much simpler, and didn't distract you from the orchid. Painting is partly about seeing clearly and painting that (which is hard enough), but it's also about choosing what you want to see.

PS: The other thing to notice is the creepy eye shape just below the handle. Absolutely not on purpose. It's just the way the light hit the brush strokes. Kind of cool, though. I think...
Posted by Connie Kleinjans