I've found that it's interesting to use a 6x6" board that I previously painted on. These are paintings I don't like very much, so using them as a base coat is a great way to make them mean more to me. In some cases, I go in and scribble with oil-based pens (I mostly use Sharpies and some Uni brands). Then I like to let some of the scribble work show through. This one is moving further away from reality, but you can still see that it's a face. Or most people can. Not sure if that matters. I'm also experimenting with pencil and scratch lines.
Posted by Connie Kleinjans No comments: 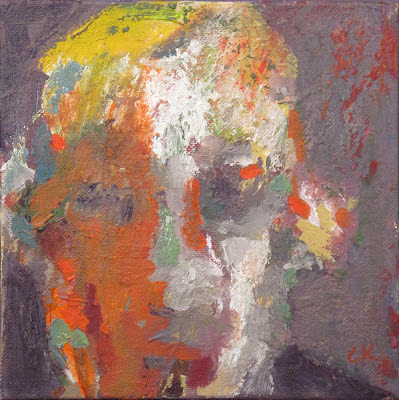 So I called this blog "Painting what feels right" for a reason: I want to create works that come from who I am. In fact, who I am today. Not tomorrow. Not when I was in college. And it feels like I'm starting something good with these faces I'm painting.

The way it came about was that I saw the work of Catherine Woskow, and was blown away by her head series. The paintings seem elemental, emotional, yet also have a focus on the surface qualities of the painting, on textures in the paint. Now, I love texture, but at the same time I've been moving more and more toward figurative work. But while I like some of the things I've done, it didn't seem like I had an arc, a direction. But doing these paintings of abstract faces, with a focus on paint and on character, feels right. Maybe I'll do some figures in there, too.

I've started working small, at least at first. I learned from the still lifes I used to do that executing a lot of small paintings, and doing them frequently, makes you learn really fast.

You know what's weird? I still don't know why I love these. I mean, they're not normal. They're not what people usually want on their walls. They're hard for most people to live with. But maybe a head, a face, is the most basic form of a human picture? Could be. Whatever, it feels right! And that's what matters.
Posted by Connie Kleinjans No comments: 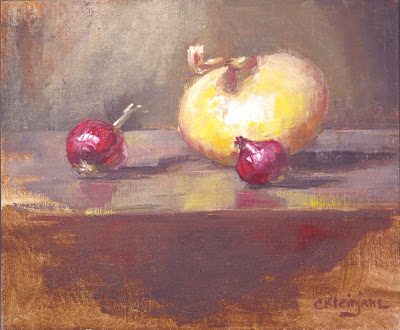 Last fall I needed to be in Arizona, so I took a still life class at the Scottsdale Artists' School. The teacher was David Reidel (http://davidriedelfineart.com/), who does gorgeous still lifes in a traditional style. In the three-day workshop I did a few paintings and liked this the best. I found my reflexes coming back from my small still lifes, sort of. These were different. I learned about chiaroscuro, edges, and quiet, rich palettes. The eye opener about edges was that you can drag the color of the object into the space around it, softening the edge. I knew painters did this, but I'd never known they would pull the paint that far, so that you saw streaks. But it works. Interesting. This was a big departure from the way I'm painting nowadays, but a fun exploration.

Posted by Connie Kleinjans No comments: 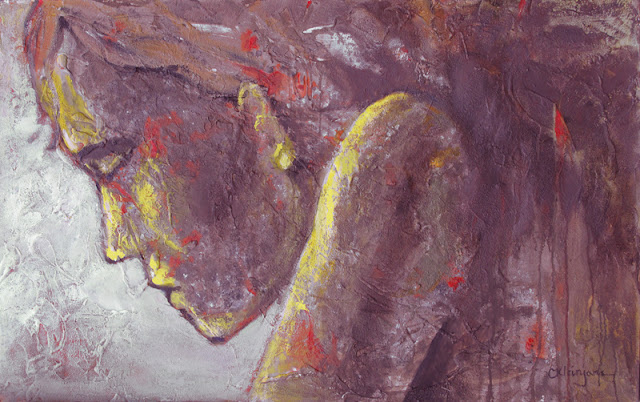 NFS. This one is a bit of an enigma. I built the texture and threw paint hither and yon, then saw shapes and started to paint, and this emerged. In feeling for the title, I saw a sense of waiting, of holding on, but the posture makes it look to me like someone in the starting blocks for a running race. Which fits the title very well. So I left it.
Posted by Connie Kleinjans No comments: