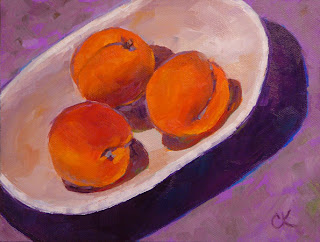 More apricots. I'm afraid the bowl might actually be a spa-style soapdish, but the fruit fit in it so nicely! I did this last week, shortly after my prior post, and in between I sacrificed two of the 'cots to appetite. Below is the painting in process. I still think I'm covering up too much of the underpainting. And sometimes I like the underpainting more than the final. Maybe there's something about the spontaneity. Hmm. 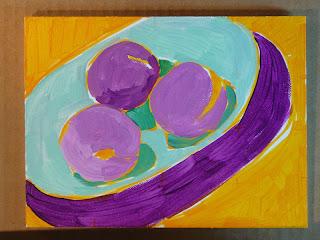 Last weekend I was in LA and got to visit the Irvine Museum. It features work of the California Impressionists, whom I am only now coming to appreciate. I especially liked the work of Franz Bischoff. There's just something about the way he puts the colors down that I love. Maybe it's his background in painting ceramics that gives his work a graphic feel. I don't know. But I get breathless when I look through the book I bought of his paintings. I'm finding other artists like that, too: Euan Uglow, John O'Shea.

One fun thing about the California Impressionists is that I live where a lot of these painters worked, and there's scenery across the street that looks like their paintings. It's giving my hikes a whole new experience. Must. Get into. Plein air painting. . .
Posted by Connie Kleinjans No comments: 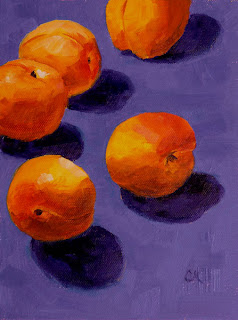 I seem to be into hot colors right now. Maybe it's the season, or maybe it's the color of what I'm painting: fruit available in the season. Is spring fruit yellow-orange? I'm seeing a lot of that color and blue in recent paintings. Whatever! Apricots do that lovely blush thing, and I thought these would look good on an intense blue.

I shall wax philosophical for a nonce. I'm noticing an interesting factor in my painting: I'm having to use my emotions instead of logic to figure out what I want to do. And if I don't do what appeals to me -- what I want -- I lose the desire to paint. It becomes drudgery. And I refuse to let that happen.

I think that, in this society, using our emotions is not that natural. We're used to figuring things out with our brains, mostly, while using emotions for energy or validation. And the working world certainly is brain based. So this is an area of growth for me that I had not anticipated. That's actually kinda cool.
Posted by Connie Kleinjans No comments: 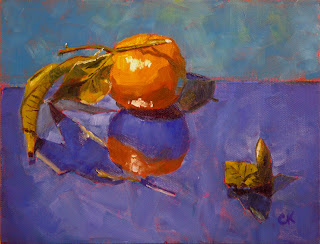 I'm still playing with the reflections. It's an interesting challenge. Now, I have a lot of colors of construction paper, and when I create my setup, I often use sheets of it behind or underneath the item. In this case I used a sheet of aqua paper behind the orange and ultramarine paper under it beneath a sheet of glass. The reason I'm explaining this is that the backdrop sheet reflects in the glass and the colors go catawhumpus. It can make your eyes go wacky trying to figure out what the colors are, not to say values (as I mentioned in an earlier post). I have one of those neutral gray viewfinders with the slider that lets you change the aspect ratio. The viewfinder also has a couple of holes, and you can look at colors (or values) through them. This has proven very helpful.

Another funny thing I noticed about this piece is that the size of the items painted makes it look like this might be a much larger work. I think that in the smaller works we tend to do close-ups; it gives the work more punch. This works well in something small, but might be too much in something big. Depends. Many artists have made it work.

One thing I'm pleased with here, though, is that I let the orange underpainting show through more than I usually do. I like doing that, but often go overboard on covering the canvas. When I do that, another favorite tool is my little pencil squeegee.
Posted by Connie Kleinjans 1 comment:

"Floating in Glass," 6x8, oil on canvas board 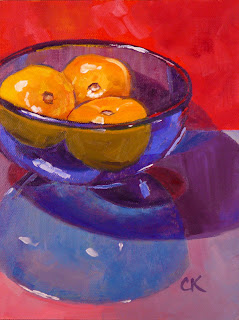 These are the same tomatoes I posted yesterday. I really liked their color, and was remembering how I enjoyed the combination of reflection and shadow from a recent post. That painting is leaning on some books in a bookshelf across the room, and even from here I like the depth, and the way that where the reflection and shadow overlap you get the darkest colors. So I used the same tomatoes as yesterday and set up another reflection+shadow. But apparently that wasn't complicated enough for me. I had to add a colored glass bowl, which introduced transparency. Then, while I was playing with the setup, what I fell for was the color combination.

But working this one out was pretty tough. As with the prior work I linked to, I really, really had to pay attention to values. Yes, they're darkest where shadows and reflections overlap, but other areas are more complicated. I also found that there was a shadow that reflected the red background, and in the setup the red was really bright. But that was terribly distracting, so I darkened it.

It was also fun how the tomatoes seemed to float in the glass. So I used that for the name.

Here's the piece with the underpainting in place. 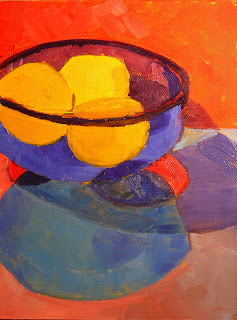 It looked awful on my easel, but here it looks kind of geometric and decorative.

I have to say, this one looks like it would be interesting if I painted it big. These small pieces are often used as studies. I blew up another one recently. I'll post it soon, and think about this one.
Posted by Connie Kleinjans 1 comment: 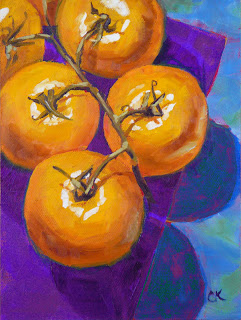 This is a great time of year for lots of painters. For those who paint outdoors, it's just gorgeous. For those of us who do still lifes, there's wonderful produce in the markets. Me, I found these tomatoes that were an amazing color. I put them on a complementary background then had at it. I'd still like to loosen up more, but I'm feeling in the mood for hot colors and this qualifies.

One part of painting that's always difficult for me is the drafting. I know it's a good idea to spend a half hour every day just drawing, but I can't seem to make myself do that. So recently I've been taking a picture of my set-up, cropping it to the composition I wanted, printing it, then drawing a grid on it. I divide each side in half, then divide each half again, so it's 4x4. That gives me the center for the entire canvas, as well as a center for each quadrant, if that makes sense. Eventually I assume I'll learn to just do this by eye, or with my view catcher. But I just looked at something I considered finished, and there are size problems, so even with the grid my eyes fool me.
Posted by Connie Kleinjans 2 comments: 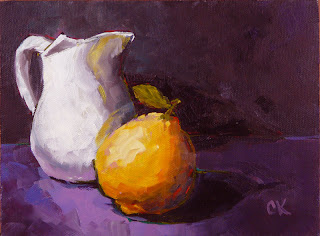 As long as Becca's lemon was still ripe, I thought I'd paint it again. I love this little pitcher, and the two together made me think of making tea. Then I decided that they were dancing, hence the title. The process of coming up with a title can be pretty bogus, really. Maybe I should try harder to figure out what I want the painting to be about, then reflect that in the title. See this prior post.

Interestingly, I've also read that it's best to have an odd number of objects in a picture (and, personally, I think things like shadows are objects in a painting). Here, there are two, so I tried adding a tea bag on the right, but it wasn't happy about it.

In the prior painting I was also intrigued with what you can do with underpainting. And I've noticed that when I see a painting in process (think YouTube), I often like it better before it's finished. In the prior painting I really liked the block-in. It has something electric about it. So, for this one, I tried blocking it in with hot colors: 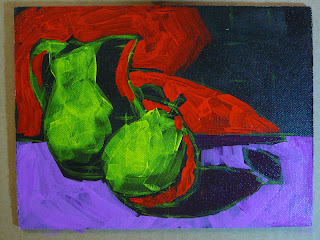 Maybe this is too much like 60s psychedelic posters. I'm not sure, but there's definitely something interesting about it. I may have to play with it some more.
Posted by Connie Kleinjans 2 comments: